All pictures and text on this site are copyrighted ©1982-2022 Alex Peck.  All rights reserved. 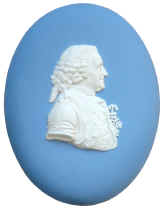 A reissued  Wedgwood portrait plaque of Carl Linnaeus (1707 - 1778), the founder of modern taxonomy.   The pattern was originally made in 1775 by the English sculptor John Flaxman (1775 - 1826), and was modeled on an 1773 wax portrait  by C.F. Inlander.  Linnaeus appears with a sample of Linnaea borealis (the twinflower), his favorite plant and a symbol he adopted when granted a Swedish noble title in 1753. 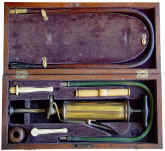 A c. 1880 antique tongue depressor with ring for hanging from a chatelaine.

A c. 1860s antique amputation saw by Gemrig, Philadelphia.  The saw has an ebony handle. 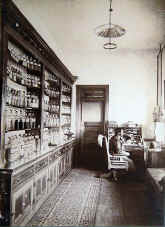 A rare 1860s antique dental  pelican with arm signed COLLIN [PARIS].  The body of the instrument was carved from a piece of horn and the single arm is easily removed for cleaning and storing.  This is probably one of the last pelicans made, and it post-dates a Charriere pelican illustrated in Bennion, Dental Antiques, p. 36. 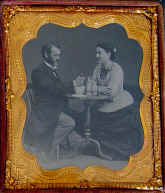 A very rare c. 1830 Tiemann part-surgical set with a large capital bow saw stamped: TIEMANN / N[EW] YORK.  This is thought to be the earliest Tiemann mark.  The single-piece ivory handle of the saw is of a pattern that was first introduced in the late 18th century.  The two original rather long double-edged knives are signed: W. CARTER / RUE DE L'ODEON, indicating a previously unknown possible collaboration between Tiemann and a Paris maker.  The ivory handles of the knives have a honeycomb cut, a pattern seen in other pre-1860 Tiemann sets.  The tissue forceps is solid silver with tips of set-in steel.  The case is unusual in that the bands on the rosewood exterior are German silver, not brass, and the interior is lined with a turquoise suede leather, not the typical velvet cloth.  The lid to the interior compartment above the capital saw has a silver ring-lift, and the leather has tooling around the edge.  The removable tray that once held the knives, tissue forceps, and other pieces is missing, though the instruments that were originally in the tray are clearly seen in their impression left in the lid's soft leather lining.  The fabric that covers the case's bottom has a period pattern.  All-in-all, this is a most remarkable and important, albeit incomplete, antique surgical set. 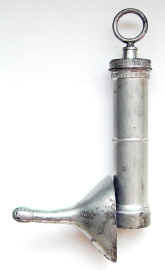 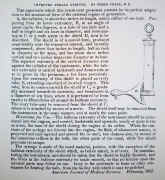 A rare c. 1840 pewter antique vaginal douche with anthropomorphic nozzle.  Dr. Heber Chase, of Philadelphia, describes the construction and use of his Improved Female Syringe in the February 1837 issue of The American Journal of Medical Sciences.  The antique gynecological instrument is also pictured in Henry Smith, M.D., The Principles and Practice of Surgery, 1863, Vol. II, pl. LVIII, fig. 20.  The caption reads: Chase's vaginal syringe. Shield to close the vulva and assist in retaining the injection.

A fine Civil War surgeon's pocket Colt revolver with matching serial numbers 206433, indicating an 1862 manufacturing date.  The barrel is 5" long and the rifling is sharp.  Both it and the frame retain areas of original bluing, and the brass trigger guard and grip strap have much of their silver-plating.  In addition, the walnut scales have their original varnish.  The cylinder scene is crisp and the action is strong.  The butt strap is engraved: S.C. Gordon, M.D.  Dr. Sidney C. Gordon (1840-1924), of Georgetown, Ohio, served as assistant surgeon and surgeon in the 59th Ohio Volunteer Infantry (59th O.V.I.) from August 1862 to November 1864, then in the 189th OVI.  He was present at the battles of Stone River and Chickamauga.  Surgeon Gordon was captured by the Confederates at Chickamauga and paroled in September of 1863.  During the Atlanta Campaign, he served at the General Hospital Chattanooga.  Surgeon Gordon's military file from the National Archives has been copied.  For the history of the 59th OVI, see http://www.ohiocivilwar.com/cw59.html.